You are here: Home / Content Marketing / The Demographics of Cell-Phone Internet Users

Internet Use by Cell Phone is preferred by younger and less affluent people. 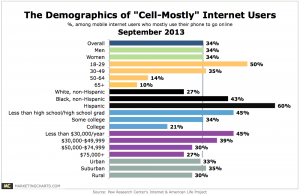 63% of mobile phone owners used their devices to go online  this year, according to a new report from the Pew Research Center’s Internet & American Life Project.

Despite no gender differences, there are some strong variations in cell-mostly internet use when sorting by age, ethnicity, education attainment and household income.

Predictably, the percentage of mobile internet users who rely mostly on their device for access is higher among younger age brackets.

Beyond age and ethnicity, there is also a strong skew towards lesser-educated, lower-income respondents.